How to Write a Winning Direct Mail Letter 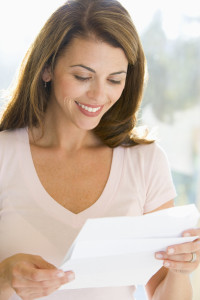 One of the most puzzling things in today’s direct mail is the letterless direct mail effort. There’s a brochure and an order form but no letter! It’s more than puzzling, it’s astonishing.

The right kind of letter, even a business to business letter, should resemble the kind of letter my Grandma Selma wrote to me when I was quite young.

For starters, her letters were instantly recognizable thanks to the still lingering . scent of her Rosewater, her beautiful, even handwriting, and the great stamps on the envelope.

Those elements were Selma’s “Brand”.

She was a great writer, too. A journey to Atlantic City felt like a great adventure when she wrote about it.

Right off the bat, Grandma Selma accomplished two things: 1) she established a brand that built on itself and 2) her copy made for compelling reading.

That’s what you want to do and you can thanks to brilliant mailing list selection, understanding your prospects and the magic of the digitally generated letter.

You also want to do something else. You want to create a positive response from your reader. Note the singular “reader”, not “readers”. Think of the person reading your letter as a person, the only person.

You have a heartbeat to grab her attention, then you have to hold it.

I’m often asked if a letter should stick to one page.

And, of course, you should always test. The difference between a great letter and a merely good letter can be a 500% boost in response.The answer is that a great direct mail letter is as long as it has to be. No longer and no shorter. We’ve written one page letters, even half page letters, that performed wonderfully well and 14-pagers that beat the pants off shorter letters in carefully planned tests. It depends on the product and the audience. A professional direct mail copywriter will know instinctively which is better.

I always begin my letters with an outline of what I want to say. Then I work on its different sections:

The Opening of the letter has to arouse interest. Years ago, it was known as the “Johnson Box” and often had a border around it. It preceded the Salutation, and could lure you into the letter, or start some excitement about the offer.

Once I wrote in that box, “Hundreds of truckloads of name brand luxury comforters are pulling up to Marshall’s loading docks this week”.

If you were excited about that prospect, you’d read on.

The Salutation can read: Dear John Smith. That’s fine, bland, but at least it’s personalized. It is even better if you know something about the person and make the salutation personal, which is quite different from personalized. So, if you know I came from an antique collector list, you can write: Dear Antique Lover, or, perhaps, Dear Friend, Do you ever watch the Antique Road Show?

The Body of the letter contains all the pertinent things your prospect needs to know about your product or service with benefits explained in a fascinating way, the exclusive and time-limited Offer, the guarantee to give them the assurance that they can buy from you in the mail or online, and various versions of “call to action” to urge response now.

A P.S. at the bottom of the letter is almost mandatory thanks, mostly, to an odd quirk of human nature that makes a lot of people look at the end of the letter first to see who signed it. The eye just naturally keeps going down to the P.S. where you will have summarized your main benefit point and offer succinctly. That will drive genuine prospects back to the top of the letter to read more.

We called the customer and asked permission and she said if she agreed with the copy she’d let us do it. So we wrote it, sent it to her and it was about an accident she’d had and how quickly and easily American Express had taken care of all the stress. At the end we put a P.S. where she admitted we’d edited her copy, and we’d given her a small Tiffany chain to thank her for doing the reading and making the changes to her own True Story. It worked great.

So, think about your letter. It is the one to one relationship you’ll have with your prospect/customer. Do a great job with it, and you’ll have amazing results too.

P.S. Report back to KD Mailing & Fulfillment and let us know how it worked.